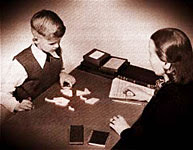 I turn 40 this month. Expect much wailing and gnashing of teeth on said day. In this time of taking stock, I realise there are several life skills, things I’ve yet to learn:

Play an Instrument
Despite singing solo at school choir (and taking a beating for it from age eight), the only thing I know how to play remains iTunes. As a youth, I was press-ganged into playing the recorder- an instrument as mind-numbingly tedious as a Russian bread queue put to music. After I broke the second reviled wind instrument against my knee, mom cancelled lessons, and I remain to this day a musical quadriplegic.

Perhaps I should join a choir. Not a dreary grey Christian church one that sounds like cold porridge, or a tambourine-slapping, Charismatic, Kum Ba Yah gaggle of God-botherers. I’m looking for more of a White-boy-Negro-Gospel-Choir sound.

Get a Body
Right now, I'd rather get an artificial leg with an ashtray built into it than even drive past a gym. My body’s like a sagging late-model station wagon that drives my brain to work. I am on a diet, and so far have lost the Weber barbecue lid I've been hiding under my T-shirt. So now I'm skinny as the lead-singer of The Verve, but with the muscle tone of a blancmange- which leads me to the next skill I'd like to learn…

Kill Somebody with My Bare Hands
Despite having anger issues, I can’t knock the skin off a rice pudding. Below my Ego, Superego, lurking in the Unconscious, is a roiling, nameless rage. I've discussed this with my therapist, and she feels the occasional murder would serve as a cathartic Id release, and help move our sessions forward. Well, she actually didn't say that in so many words, but who among us can honestly say that they haven't wanted- at some stage or another- to grab a ballpoint pen and stab somebody through the heart with it- possibly during a waffling, interminable board meeting? I know I have.
Posted by timothymarcjones at 2:31 pm

Murder could double up as good cardio. The endless benefits of murder.

Well just know that I have had a crush on you and that intimidating mind of yours since you were 19. Much Love your stalker. Happy 40th.

Ooo, look, you have a stalker secret crush! I am jealous.

What was it with 1980's South African kids and recorders? I was subjected to it too! And gyms are the playground of the devil. I like the sound of the artificial leg ashtray - maybe you'll get one for your birthday.

I am sorry to hear about your birthday. If it helps - playing the (musical) saw is really easy to do, no lesson or skill required. AND on the upside it could aid in getting you one step closer to that prosthetic leg, and also killing someone.

Thanks for the compliment. Please go here, follow instructions, and we'll talk.

You loathe recorders and gyms. Come to my arms!

Sorry, the sound of a played saw has freaked me out since I was 7. Thanks for the birthday commiserations.

40 is not so bad. Leave the wailing and gnashing of teeth till you turn 43. Like me this month.
Feel better now?