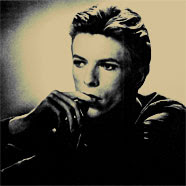 The Berlin Wall went up overnight, this week 50 years ago, in 1961. I’ve always held a fascination with the Wall era, and this anniversary reminded me of one of my favourite Bowie songs.
David Bowie recorded the song Heroes, in 1977 West Berlin, where his studio had a view of the wall, 300 yards away.

The song tells a story of two lovers who meet and kiss at the Berlin Wall, defying the guards at the gun turret, making their love into something "heroic." When the second chorus arrives, the emotional level escalates tenfold, with Bowie starting to scream out his lyrics. For me, it’s one of the most emotive, anthemic love songs ever recorded.

Bowie stated on several occasions that the song was based on the time he "saw two lovers standing by the Berlin Wall. An East German watch tower stood high above them, manned by armed guards. Why did they choose the gun turret? I assumed their motive was guilt, thus the act of heroism in facing it. Maybe they felt guilty about their affair and were drawn to the spot for that reason, to cause the affair to be an act of heroism. It seemed an act of personal survival by self-rule.”

“We could be heroes/ Just for one day.”

Postscript:
David Bowie died in January this year, 2016. He's gone. But he's not.
Posted by timothymarcjones at 5:26 pm