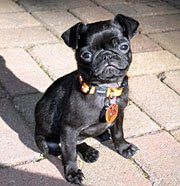 I haven’t seen anyone naked since last Michaelmas. I don’t remember much, except a tearful rush of gratitude at being there at the time. Since then, apart from a well-thumbed June 2006 copy of Juggs magazine; naked women have been rather thin on the ground.

The gambit of sidling up to said paragon at the bar, suavely tossing a set of scuffed late-model Ford Fiesta keys on the bar counter and say “You could be driving home in this tonight, babycakes” has proved fruitless.

So I’ve got me a sawed-off pump-action babe-magnet; Stankie, my pug puppy. This dog can make girls shriek at 100 paces, and derail the skewed hamster wheel of a woman’s mind at 50 yards. Stankie doesn’t turn heads, she stops trains. Any public appearance brings forth a scrum of women hysterical as a riot at an Enrique Iglesias book signing.

I’ve yet to capitalize Stankie-Mania into any tangible totty. Perhaps I should dispense with the ineffectual chit chat and give chloroform a bash.
Posted by timothymarcjones at 9:40 pm

I still say you should just go for the boobie grope whilst they're distracted. Possible results:
a) They scream and try and have you arrested for indecent assault. Not good, but you can babble incoherently and cry about not having taken your meds or something. Positive you could get away with it.
b) They're so distracted by Stankie that you can progress to full on lecherous groping.
c) They cuteness of Stankie overpowers their morals, inhibitions, and taste and they take you home with them....

Does Stankie hump legs? Perhaps you could teach her - demonstrate on the said crazed, glassy eyed women? Worth a try?

Stankie's a girl, so I'm not sure if hot lesbo leg-humping action would be such a good opener.

Works for me. Wait. Is stankie a dog?

She is so friggin cute!