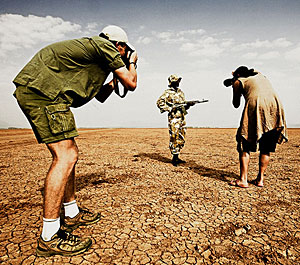 Game ranger weaponry: what would you feel safer behind as one of the Big Five bears down?

Bambi is Jesus
… And any situation where you may need a gun in the bush is anathema to me, heebie-jeebie city. I got scared watching Bambi, and that presented wildlife- through the rose-tinted lens of Disneyfication-  as adhering to peaceful, Judaeo-Christian principles of live and let live. The Big Five cast of The Lion King may look personable and winningly able to burst into song at important plot points, but their real-world counterparts excel more in the stomping, goring, and gouging modes of self-expression. My aversion hasn’t been helped by being snapped at by crocodiles, charged by elephants, capsised by hippos, and an ostrich giving me the hairy eyeball. If anything larger than a pimply, adolescent guineafowl approaches the land Rover I go into anaphylactic shock.

Hand-powered Emergency Exits
On any game-viewing outing, I always carry a judicious amount of whiskey, tranquillisers, and a stepladder, a one-man fire escape I can erect and scuttle up to the top of if no climb-able trees are nearby when mother nature bears down snorting, growling, or trumpeting. Unlike many blithe holidaymakers, I’ve seen a rhino peel open a three ton land Rover like a can of beans. Some tourists, usually the eco-friendly hippie types, say that witnessing the Big Five while on foot is “humbling", and that the animals are “noble, “majestic". Bollocks to that. I don't care where you come from, whether you're paying in euros, pounds, or dollars- when buffaloes charge everyone speaks the same international language of screaming. Terror is not classist, we all taste the same, and a Hippo with PMS doesn't really care that you bought your Greenpeace T-shirt at Oxfam.

Dale Carnegie: How to Win Friends and Not Get Eaten
Seeing a game ranger nonchalantly sling a rifle over his shoulder at the start of any ill-advised walking safari makes me scared as a mielie sharing an elevator with a scythe. So imagine my Nesquik-bowelled terror when I saw my guide for the morning’s walk holding an AK-47, nonchalantly holding it casually as a cigarette lighter.
“What will we be needing that for?" I asked, with a voice like curdled milk.
“Elephant. In the forest here, you can’t hear them, so quick quick I must shoot. Warning shot, no time." He said, in a lazy, avuncular Swahili accent, calmly as if he’d been giving me the cricket score of a slow-going test match.

I don’ t know about you, but any situation that needs any weapon beyond a pithy, disdainful retort or an icy glare of reproach, is a little far from my preferred comfort zone.

The Librarians Get Eaten Too
South Africa’s savannas and plains give animals that prey on humans less to hide behind. So a lion or buffalo keen to see the colour of your insides can be spotted with enough time for the Ranger to unsling his 303 rifle, slam home the bolt, and fire off a single carefully aimed warning shot. Not so in the forests of Tanzania, where the thick brush allows the irascible wildlife and hapless human to get cheek by jowl, sardined together like commuters in a cramped London Underground train. Except here several of the commuters are tetchy, man-goring buffalo the size of a black London cab- not mousey, whey-faced librarians waiting for the change at Edgware Station.

Bilbo Gets an AK-47
Nevertheless we pressed on into the forest, like Bilbo Baggins and pals. I don't recall Tolkien mentioning in The Hobbit that any of the dwarves had an AK-47 though. The book would have been a lot shorter if one of them did, I guess.

Posted by timothymarcjones at 7:10 pm

Nothing funnier than watching a human being chased by a wild animal.

in the blink of an eye.